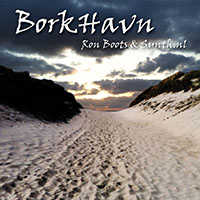 This is the second album by Ron Boots & Synth.NL. We first met at a Synthesizer Meeting organized by the Dutch 'Synth Forum' in 2006. There we started talking about synthesizers and synthesizer music and found out that we shared the same fascinations. As a result Michel signed up as Synth.NL in 2007 with Groove Unlimited. We worked a lot in the studio together after that remixing and mastering. We have become very good friends over time. As you know we recorded our first album on a holiday trip and we repeated the process. This time we rented a house in Bork Havn in Denmark with our families. During the day we took some trips and in the evening Ron and Michel made music in the temporary studio they created in the house with equipment brought from their home studios. We got the inspiration for the music we played from the beautiful nature in Bork Havn and the nice time we had with our families over there. All the tracks were played live as improvisations during this holiday and 8 years later! finished in both our studios. The album will be released before the end of 2020! The album will be released on CD and will also be for sale as a download album both in MP3 and FLAC format.

Please note samples will follow soon and will be only excerpts of the actual songs. The whole CD is over 60 minutes long and holds 9 tracks!