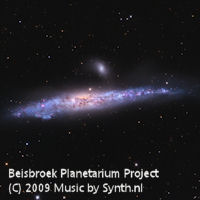 I was asked to produce new music for a Planetarium Show that was made by the Beisbroek Observatory in Brugge (Belgium). The total show lasts 45 minutes but they needed my music for the first 13:30 minutes of the show. So I made this music especially for this project. My music had to be in the background and therefore I couldn't use much beats or leads. I tried to create more atmospherically and spacey music for this project that would fit nicely under the voice over and with the video. Unfortunately I didn't get the video so I had to work with the voice over track only. Well actually this is my first documentary and I liked doing it. I hope to do more projects like this in the future. I will release the music I made somewhere in the future by the way. And even though the voice over is in Dutch I'm sure you will get the picture by listening to the track in the player if you don't understand Dutch. I used a picture of the 'Whale Galaxy' with kind permission of NASA to stay in the theme of my current OceanoGraphy Project by the way.

Music with Dutch voice over. I will release the music I made for this project somewhere in the future.