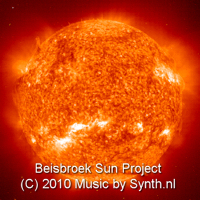 Last year I made 15 minutes of music for a Planetarium show that was made by the Beisbroek Observatory in Brugge (Belgium). Apparently they liked it, because recently they asked me again to make music for a new show. This new show lasts 45 minutes in total, but they only needed my music for the first 10:30 minutes. So I made music again especially for this project. The only thing I knew up front is that the show was about the Sun.  I pictured the Sun as a  violent and turbulent place., so the music is a bit less atmospherical this time but still it had to be in the background and therefore I couldn't use much beats or leads. I did try to keep it spacey though so it would fit nicely under the voice over. Unfortunately I didn't get the video this time either so I had to work with the voice over track only. This is my second documentary and I like doing stuff like this. I hope to do a lot more projects like this in the future. I will release the music I made somewhere in the future by the way. And even though the voice over is in Dutch I'm sure you will get the picture by listening to the track in the player if you don't understand Dutch. I used a picture of the Sun with kind permission of NASA.

Music with Dutch voice over. I will release the music I made for this project somewhere in the future.